North Coast campaigners are continuing to oppose Rathlin Energy’s application to drill an exploratory well into the shale layer at Ballinlea. The Protect Our North Coast (PONC) group, composed of local Ballinlea residents and residents from the wider Rathlin Basin licence area (licence PL3/10), has been campaigning strongly against the proposal for some time now, and more information is available on the group’s website, facebook page and twitter feed (details below).

The group has secured strong cross-community support among local people as well as at all levels of political representation, local and national. At a recent meeting (26th May 2015) the newly formed Causeway Coast and Glens Borough Council heard from PONC and all parties expressed support for the group’s work – they were particularly concerned to ensure the health of local people. The group has the support of local MLAs from all parties.

Not only has PONC been holding public meetings to raise awareness about the proposed well, the detail of the application, and the associated Environmental Impact Assessment (EIA) and Environmental Statement (ES)…they also ran a crowdfunder, raised over £10,000, and engaged consultants to review Rathlin Energy’s EIA/ES. The consultants identified a number of inadequacies in the documentation provided by Rathlin Energy, or rather by their agents, RPS. Links to their documents are included on the PONC website.

The application is still with the Strategic Planning team of the DOE at head office in Belfast, despite planning powers being devolved to the new local authorities on April 1st. No doubt the application has been retained by head office because it is complex, contentious, and of regional significance, or at the very least, because it has the potential, according to the consultants, of causing significant environmental impacts if allowed to proceed. One of the consultants even went as far as to say that approval of the application in its current form would be unlawful.

The PONC group will be addressing the CCGBC again on 22nd June in a dedicated workshop on the subject. It is understood that Rathlin Energy will also be addressing the Council at that workshop, to present their different perspective on their proposals. 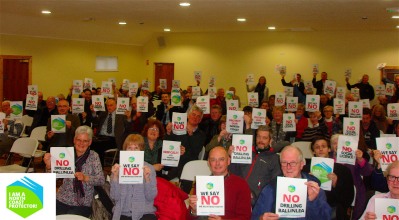